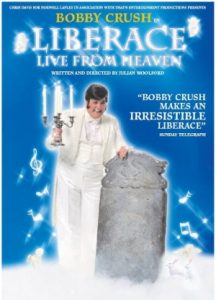 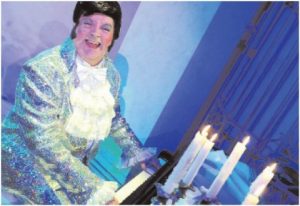 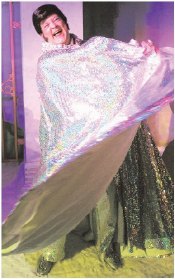 Bobby’s show “Liberace, Live from Heaven” opened at the Leicester Square Theatre for a limited season, followed by a run at the Edinburgh Festival and a 34 date tour of New Zealand. Written especially for Bobby by renowned playwright Julian Woolford, this one man show was an imagining of Liberace’s impact on Heaven following his untimely demise in February 1987. The show received rave reviews for each of its outings.

“… floats on a pink fluffy cloud of outrageous camp that in the end is absolutely irresistable. That it triumphantly does so is a tribute to Crush, who has also been working hard on copying Liberace’s speech patterns and stage manner, not to mention some nifty piano playing. By some strange showbiz alchemy, Crush seems to be able to channel the love. At the end, the audience has to vote on whether he stays or goes; there is no contest”
THE TIMES